Bulletin #114 2014 states that all piping mains, headers and branches should be identified as to the physical state of the refrigerant, i.e. vapor, liquid, etc., the relative pressure level of the refrigerant and the direction of flow. All components of the refrigeration system, e.g. receivers, heat exchangers, accumulators, etc., should also be uniformly identified.

The changes specified in the 2014 Revision of the guidelines are as follows:

Ammonia pipe markers will contain or be divided in 5 section or components:

The following chart shows the recommended pipe marker letter height and marker size based on the outside pipe diameter of the pipe to be identified and the distance between the viewer and the pipe.

Considering these factors, the size of the pipe marker and lettering should be selected to provide quick and positive identification. Pipe location, from a viewer's standpoint, will be different on every installation. Therefore, on-site decisions will be necessary to provide the optimum pipe marking system.

Abbreviating the names given to pipes in the ammonia refrigeration system will assist the operator in identifying and tracing the system. To further assist the operator make sure the physical state (LIQUID or VAPOR) as well as the pressure level (HIGH or LOW) are also identified in the marker. i.e., Adding -10° to a particular recirculated suction line and 0° to another one, would serve to differentiate between 2 Low Temp Recirculated Suction (LTRS) lines.

1. Component markers will bear the name of the equipment they identify, e.g., RECEIVER, ACCUMULATOR, RECIRCULATOR, etc.

2. In addition, component markers will be provided with a pressure level designation.

Component markers will have BLACK letters on a SAFETY ORANGE field.

Pressure Level will be indicated by the word HIGH in RED letters or the word LOW in GREEN letters printed or applied flush with the right edge of the marker.

A reference chart that fully explains the ammonia refrigeration piping and component identification markers, including the approved abbreviations, should be placed in areas that are conspicuous to operating personnel. Regardless of the piping color scheme selected, a legend or key to the meaning of the colors should be posted in a conspicuous area. The reference chart, legend, or key should be made of durable material that will remain legible. 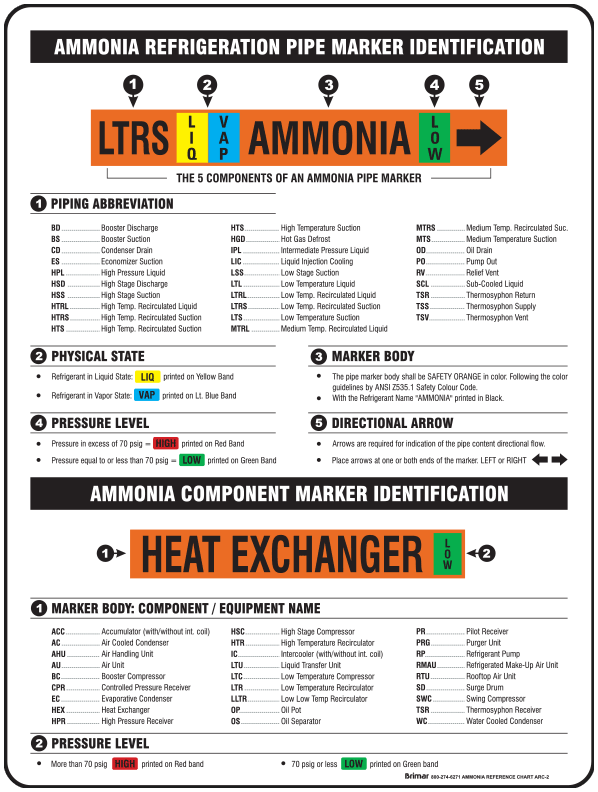 All Brimar products are manufactured in the USA